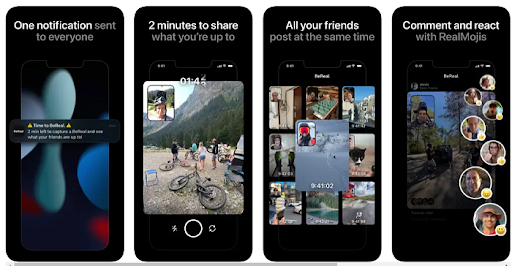 TL;DR: Amongst GenZ, BeReal is the new social media app to download.

BeReal has blown up ever since GenZ figured out about it. This app sends you a notification every day at a random time and requires that you post a picture of what you are doing at that moment. You have two minutes to post your BeReal before it is considered “late.” It reminds me of when you turn in your homework assignment late. This app lets people, brands, and social media influencers post raw content that is unfiltered and in the moment. One image is taken from your front camera while simultaneously taking a picture with your back camera.

BeReal even has features that add to that “rawness.” This app lets your users know how often you have retaken your picture. Also, it enables you to know if your followers have screenshotted your BeReal.

This is the first app to exist that takes a step back from the beauty standards that our society has set forth and forces people to share their unedited selves. Other apps, such as Snapchat and Instagram, have taken on this format of pictures to increase their apps’ engagement.

Our GenZ Creator Counsel polled a college campus to find out how many students actually downloaded the app. Of the 50 people that asked, over 80% of students said they have the app. When asked those in the 20% why they hadn’t downloaded it, the general response was, “I haven’t gotten around to it.” It seems everyone on campus is aware of the app. It is only a matter of time before other generations hop on board to use and…BeReal.