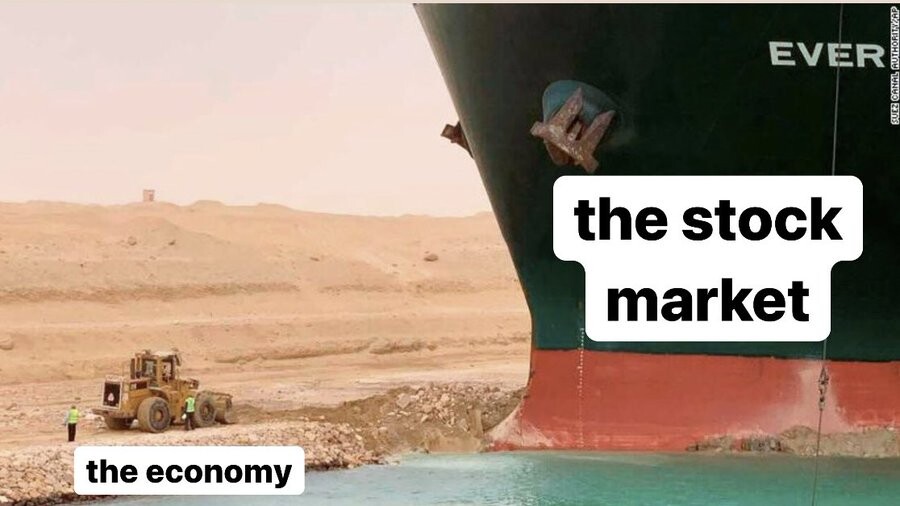 TL;DR A huge cargo ship blocked one of the busiest trade routes, and the internet did what the internet does…turned it into hundreds of hilarious viral memes.

If you didn’t see it, a massive ship got stuck in the Suez Canal for a week and the internet went crazy over it. After being stuck for almost a week, the cargo ship was finally freed on a Monday morning, but not before hundreds of memes were created surrounding it. The 220,000-ton cargo container got stuck in one of the busiest waterways in the world when it was knocked off course by heavy winds and a dust storm, causing the ship, which is almost as long as the Empire State Building is tall, to be stuck in the canal. The ship stopping traffic in the waterway was said to have cost $400 million in trade every hour it was stuck.

Humanity is funny! The stuck ship memes were almost more outrageous than the problems the ship caused. Example memes such as the boat being labeled “all my issues” compared to the small crane as “an iced coffee.” Then the memes got into “at least your issues aren’t…we can see them from space bad,” followed by a satellite image of the ship blocking the canal. When news hit of the ship being moved, users wrote and asked for it to be put back so that the entertainment it brought the internet wouldn’t have to end so quickly. Crazy, we know! If you are having a bad day, you can reflect and think, well, at least you weren’t the captain of the stuck ship in a canal costing millions in trade. It really could be worse…Suez Canal worse.